Here is a very good microphone placement technique I learned years ago for recording audio interviews and corporate educational materials.  Some people have called this the “Hat Mic” or “Hat (Mic) Trick” technique.  I’m posting this so more people can learn this great miking technique.

It involves is clipping a lavalier/lapel microphone to the brim of a baseball cap as shown here: 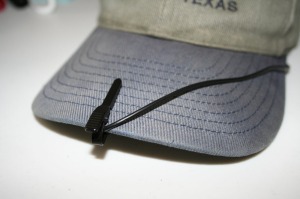 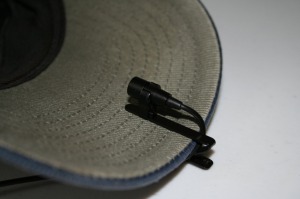 Then putting on the hat mic and running the microphone cable behind a ear and to the recorder or computer mic port. 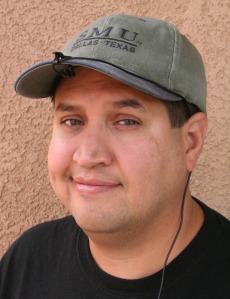 This miking technique has several advantages.  The most important ones are a constant fixed distance between the speaker’s mouth and the microphone (really helps with setting gain levels) and the microphone is out of the breath path of the person speaking (removes breathing on the mic and plosives).

Here is a MP3 audio example of the the hat mic technique in action.

Here is a direct link to the MP3 example:  http://tribalgrowth.com/files/4scoreHM.output.mp3

The WAV audio was recorded with a Olympus LS-10 and “Hat Mic”.  The MP3 audio was edited and produced using Audacity and the Levelator.

Here are the blog posts where I initially found and learned about the Hat Mic technique.

Hope this was useful. Enjoy!

In my Audio & Video learning over the years, I discovered this little nugget to improve audio quality when recording video.  I’ve only recently remembered to create a video on it.

Here is my setup:  Sony HDR-SR11 HD video camera with a 1/8 microphone input, an unbalanced lapel microphone with a 1/8 mono connector, & the AC/DC power cable for the camera.  This is a general problem with unbalanced microphones and when transformers are in close proximity.  Take a listen to the video to see the improvement in action.

The FCC recently reminded people (on 5/28) in the United States that there has been a change in spectrum allocation to avoid interference.  On June 12, 2010, wireless microphones and monitors will no longer be able to be used in the 700 MHz band (specifically698 to 806 MHz).  Here is the PDF on the FCC website.

What this means, is those individuals/groups who use wireless microphones for audio capture for video, screencapture, or podcasting, in the above bandwidth will start to receive noise and non-ideal audio as new 4G consumer devices are deployed in proximity to the wireless microphone.

The solution for the vodcasters/screencasters/podcasters is to either replace the wireless microphone or work with the equipment manufacturer to get the wireless radio inside the transmitter & receiver changed out to operate on a frequency outside the 700 MHz band.  Some manufacturers have a trade-in or rebate programs to help people with this change.

Here is another helpful link on the FCC website which lists known wireless microphones in the 700 MHz band.

Now, if by chance you live on a Indian reservation away from any mobile or cellular phone service, your wireless microphone should work just fine after June 12, 2010.  🙂