This last weekend (Saturday 2/25), I held my first Introduction to the Raspberry Pi Hands on Workshop at the Loma Colorado Public Library in Rio Rancho, New Mexico.  I had a total of 8 attendees (full house) ranging from youth to adults that wanted to know more about this inexpensive computer.  Feedback was great and it ranged from having a great experience with a new educational computer to interest in physical compute (using the GPIO pins) and more advanced topics.

I am looking forward to refining the content for the future hands on workshops for the following teach dates:

Don’t forget, if you want to sign up for a workshop, you need to use the Loma Colorado Calendar of Events page.

If you want to see all the Raspberry Pi related posts on my blog, click on this link … https://dompruitt.com/raspberry-pi-rio-rancho-albuquerque-new-mexico/

Here are several pictures from the class: 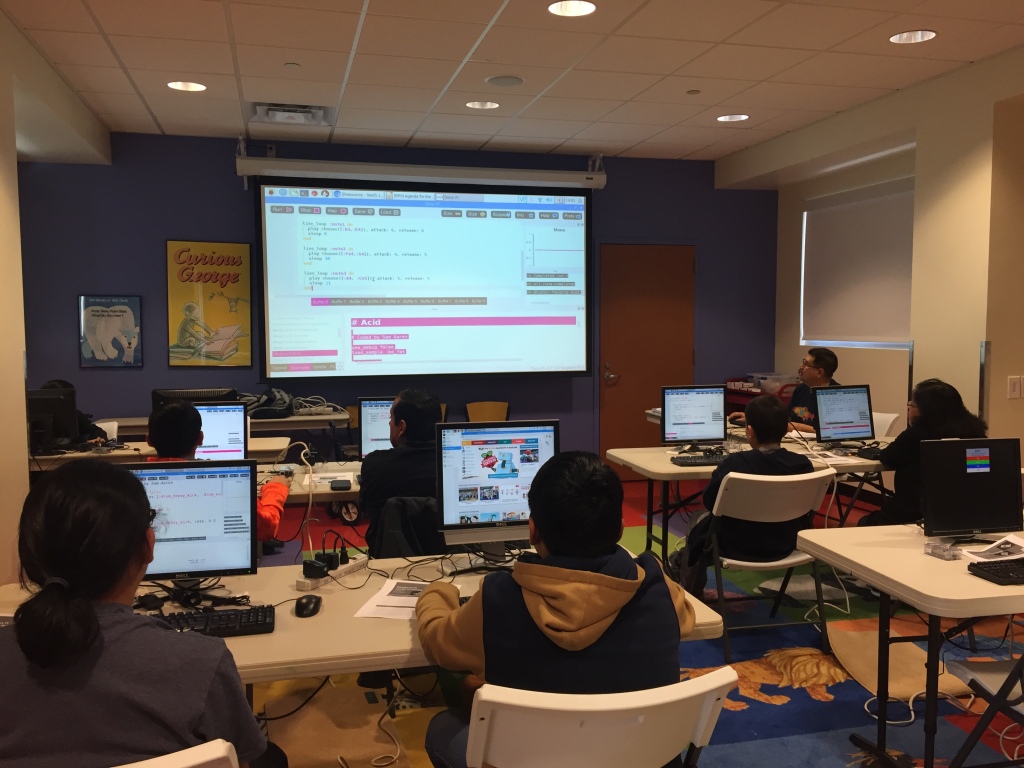 I also want to thank the City of Rio Rancho and the Loma Colorado Public Library staff, the facility is a great place to teach about technology, the support was awesome to make this event happen, and the internet access speeds are some of the best in the state!

After some back and forth with the local library, I will now be teaching some free Raspberry Pi computer classes at the Loma Colorado Public Library in Rio Rancho, NM starting at the end of February 2017 (#RaspberryPiNM).  Space is limited because this is a hands on event, so keep a eye out for the signup links on the Rio Rancho Public Libraries Calendar of Events page.

The planned dates are as follows:

The content of the class will be based on some previous teachings on the Raspberry Pi which I have included here:

On Tuesday this week, September 27, 2016, I presented the Raspberry Pi computer to the Rio Rancho Public Schools (RRPS) – Native American Parent Advisory Council meeting.  I had a 15 minute slot to cover this new little computer and show how it can be used as a tool to begin a journey learning about computer science, programming, and how to tinker with electronics.  I passed out two Raspberry Pi 3s and one Raspberry Pi Zero for the show and tell portion.  The audience was enthusiastic and really liked having the four Raspberry Pi 3s in the back of the room to check out and play with.  Here is a link to my presentation and some pictures of the event.  I’m looking forward to taking this talk to some of the local tribes here in New Mexico.

This video was made from the slides and recorded audio from a presentation I gave to the 3rd, 4th, & 5th grade Montessori class at Sandia Vista Elementary School (SVES) in Rio Rancho, NM on 2/4/2015.  My oldest son is in this class.  Enjoy!

Since I moved to New Mexico to be closer to family, I’ve been asked to help out with several things locally … some involved family, some involved tribal committees, now some involved my employer IBM.

IBM donated some money to the American Indian Science & Engineering Society (AISES) for the National American Indian Science and Engineering Fair & Expo (NAISEF). This science fair, from what I know, is held in Albuquerque, New Mexico nearly every year about the same time. This year it was on March 24-26, 2011 at the Albuquerque Convention Center. Since the company liaison could not attend (and I was not on company travel teaching somewhere), I was asked to step in and help out as a judge and to hand out the awards.

I learned part of the donation money was to be used for special awards at the fair, in fact there were 9 special IBM Innovation Awards. The award criteria was for a student or students whose science experiment is innovative and inventive. Each of the awards were $250, except the team award, it was $1000.

Little did I know how much work this would be … I spent most of the day looking at ALL the science fair projects (about 225 of them) focusing on the Math, Engineering, Chemistry, Computer Science, and Team categories (there was no “team” grouping so I had to find all of them). Oh, did I mention that there were Male and Female awards in each category except the team award? Lots of walking and talking to the kids, it was a fun day.

Since the awards ceremony is such a long event the next morning (about 3 hours long with awards in each category and age group), I tried to keep the 9 IBM awards as brief as possible, I let folks know who I was and a bit about my journey.  I really wanted to elaborate more on what made each one of the projects innovative from my perspective, but I was already running long … at least with this blog post I can do that here. 🙂

* The Chemistry Female award went to Paige Leingnag & Tawnie Landreaux for their experiment on “Effervescent Action”, this project showed a construction and setup of the experiment apparatus to precisely measure experiments in a contained and controlled way, they iterated until the setup was easily repeatable.

* The Chemistry Male award went to Wilfred Jumbo for the experiment on “The Effect of Natural Bark”, this native dye project showed continued process improvement in material collection and processing over the life of the experiment using different tools.

* The Math Female award went to Mikayla Baker for the experiment on “Trick Yah Dice”, this project showed how variations in data collection could reduce process time.

* The Math Male award went to Izaiah Lopez for the experiment on “Counting vs Skill”, this project like the other math one showed how variations in data collection could reduce time.

* The Engineering Female award went to Raquel Redshirt for the experiment “Improving the Heat Capacity of Homemade Solar Ovens”, this project showed various facets of invention and process improvement, the student also made several solar ovens and sold them.

* The Engineering Male award went to Emilio Yazzie for the experiment “Simple Electric Heat Conversion”, this project used very basic materials to construct working motors, the materials were rubber bands, paper clips, insulated wire, and batteries. Process improvement to make the experiment more stable were for the next year.

* The Computer Science Male award went to Ivan Rajen for the experiment “Computer Model of Time-Varying Heat Conduction in a Plate”, this project showed inventiveness in constructing the computer model simulation in a spreadsheet (excel) and doing real world testing against it using a thermistor on a metal plate and homemade chill environment. 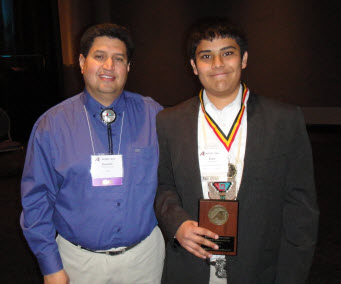 * The Team Award went to Juana Espinosa & Michelle LaGarde for the experiment “Wetland Health Evaluation: Replacing Bottle Traps with Hester Dendy Traps, Year Two”, this project was the most impressive, it showed continued process improvement and inventiveness in the construction of the Hester Dendy traps. These two ladies not only improved on the trap by modifying it to their wetland collection conditions, they also went through variations in construction to make them more durable. The both tried making the traps out of cement board to make them long lasting.

This was a great event, AISES is a great organization focused on our native youth, and I’d like to thank my employer IBM for allowing me to take time out of my work day to judge and award this event.